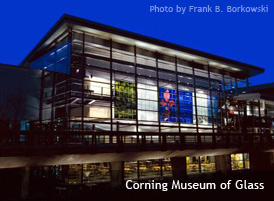 *UPDATE* Since completing the search that brought Dr. Karol Wight to the directorship of CMOG, Opportunity Resources has conducted searches for the newly created Deputy Director position and for four senior curatorial positions, Curator of European Glass, Curator of American Glass, Curator of Science and Technology and Curator of Modern and Contemporary Glass. Read about these searches here.

After 20 years, Corning Museum of Glass’s much-admired director was stepping down. He would not be leaving Corning, but would be transferring his work space to the Museum’s famous Rakow Library, where he would complete a series of books on ancient glass, a subject for which he was known internationally. The Board and President were deeply concerned about the transition after so many productive years with an established scholar. They wanted a strong leader with the administrative and managerial skills to oversee a $35 million operating budget and a 130-member staff. Yet they also recognized the importance of appointing a well-known specialist with impeccable scholarly credentials to secure the Museum’s ongoing reputation as a source of scholarly exhibitions and publications.

Opportunity Resources reached out to all highly-placed museum professionals internationally, but the specificity of Corning’s needs required an intense focus in the area of decorative arts scholars with, if possible, a specialization in glass. The search took us through Europe to Asia and Australia, with several candidates from abroad.

In the end, the successful candidate was Dr. Karol Wight, Curator of the Getty Museum’s Getty Villa in Malibu and a renowned specialist in ancient Roman glass. Karol was on the senior management team for the Getty Institute and directed operations at the Villa, where she had spent most of her career. She received her PhD from the Department of Art History, University of California, Los Angeles.

Karol provided the perfect combination of academic credentials, leadership and management skills to serve as a superb leader for the Corning Museum staff of well-known curators and specialists. She began her new position in August, 2011.