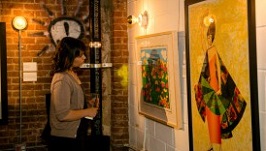 After leading IPCNY for15 years, the founder/director of International Print Center of New York was retiring. From the kernel of an idea and love for the medium, Anne Coffin had built a strong and highly-respected organization. While she felt the time was right for her to step down, she wanted to stay connected and would be a continued presence by remaining on the Board. As the organization celebrated its 15th anniversary, the Search Committee felt the time was ripe to reevaluate the strategic plan and take a hard look at its future direction, especially its fundraising priorities and its programming emphasis.

All agreed that the new director had to have strong credentials and expertise in the field of fine art prints. The person also had to have experience in managing a small staff, handling budgets and fundraising. Sourcing and word-of-mouth would be critical to this search. The world of prints is small. Because there are limited numbers of positions in the field, we needed to get the word out to everyone with expertise, even those who were working in other fields and in other art genres.

We reached out to academia, galleries, auction houses, publications, print publishers, private dealers and collectors. The response was impressive. The print community wanted the best for IPCNY. In the end, the field of candidates was narrowed from 10 to 5 individuals. The unanimous choice was Judy Hecker, a 25-year curatorial veteran of the Museum of Modern Art’s print department. Judy’s prominence in the field, finesse with patrons, expertise in the field, particularly modern and contemporary prints, and her familiarity with IPCNY made her the ideal candidate for the position. Judy began her tenure in January, 2016.