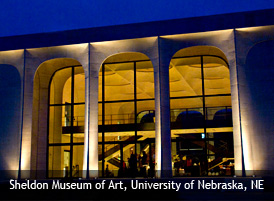 The Search Committee wanted a dynamic new leader who would work in concert with the faculty and the NAA to develop  innovative  approaches to exhibitions and education programs that would grow student and community audiences. In addition she/he would oversee the Museum’s Haymarket (downtown Lincoln) expansion to accommodate the premier collection of cutting-edge contemporary art.

At the time Opportunity Resources was chosen to head the search, we had recently completed two  searches for university museum directors. Our up-to-the-minute network of contacts enabled us to quickly present eight highly-suitable candidates.

The Search Committee chose Dr. Jorge Daniel Veneciano. Jorge had a distinguished career in urban art institutions. When we met him in connection with the Sheldon search, he was Director of the Paul Robeson Galleries at Rutgers University in Newark, where in less than 3 years his award‑winning work had completely redefined the mission and practices of the Galleries from a narrow affiliation with the art department to a respected and innovative university gallery with an urban mission, tripling its funding and expanding multi-disciplinary initiatives and education in collaboration with Newark’s diverse population.

In just a few short years at Sheldon, Jorge Daniel earned a national reputation for innovative transformations in programming and education, including groundbreaking exhibitions of women artists, expansion of the Sheldon’s collection of African-American art, and the cultivation of a wide range of cross-cultural collaborations. Jorge Daniel also oversaw the much-anticipated expansion of the contemporary art collection into the University’s downtown Lincoln Haymarket annex.

After an extraordinarily productive tenure, Daniel was wooed away by an offer in a major city that he could not refuse.