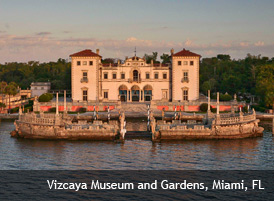 Vizcaya, the extraordinary Miami winter estate of industrialist James Deering, was built in 1916 and purchased by Miami-Dade County in 1952. Vizcaya is Florida’s most popular not- for-profit visitors’ site. Its operation was overseen by the County, but it functioned entirely with income earned from entrance fees and facility rentals. In the late 1990’s, the County agreed to cede some of the governance role to a private Trust comprised of Miami’s cultural leaders.

With the retirement of the Director and the formation of Vizcaya’s private Trust, the time was right for some self searching and setting a course for the future. The new Director would have to be prepared to make an immediate impact. Substantial experience in strategic planning, management, programming and fundraising was required.

Among the challenges this search assignment presented was that the Executive Director would have dual reporting responsibilities to both the private Trust and the County. Tact and decisiveness would play a major role in this person’s success, as well as an affinity for a large multi-cultural community.

Opportunity Resources combed through large institutions, universities and art and history museums in urban centers, where staff was accustomed to bureaucracies and complex departmental issues.

The successful candidate, Joel Hoffman, had a PhD in art and architectural history from Yale University, experience in historic preservation, and 12 years of leadership experience in significant museum and education settings.

Joel was serving as Vice Director for Education and Program Development at the Brooklyn Museum of Art, where he was responsible for programs ranging from the enormously popular “First Saturday” – attracting more than 8,000 visitors on a single evening – to the New York City Museum School, a deep collaboration with the New York City Department of Education and three partner museums. Joel’s previous position was Associate Director of The Wolfsonian in Miami Beach, where Joel focused on the challenge of rendering a world-renowned collection of modern-era decorative arts and design relevant to Miami-Dade constituents.

Since he arrived Joel has enthusiastically championed Vizcaya’s heightened popular profile, including in a 2007 Emmy-nominated documentary, and is supervising plans for restoration of an historic village on the Vizcaya site.